Is it possible for an entrepreneur to balance his own business with a career working for the City of Las Cruces? Absolutely … assuming you have the right time management skills and a passion for your work. In the case of Adrian Guzmán, the dual roles of business owner and city employee fuel each other, both creatively and financially. 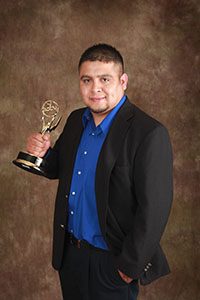 Adrian Guzmán created the documentaries Las Cruces: Past, Present and Future, Our People, Our Faith … Our Lady, and Let’s Shine, a 90-minute film featuring Las Cruces’ own title-winning Police Athletics League. Between winning awards for his nationally-recognized documentaries – which include three Emmys and 18 Telly awards – he own film company called Bully Productions. Rest comes a distant second when you love what you do. “The one thing I can say is in this business you have to constantly be creative. Every day is unique and never boring.” Film-goers are never bored at his movies either. The screening of Let’s Shine, filmed in Las Cruces, required the use of a second Allen screen after their largest one was sold out.

Born north of Grants, New Mexico, Adrian Guzmán never had to wonder about what he wanted to do after high school. He took a video production class and fell in love. “I stopped playing sports and just really got into it,” he tells us. From there he attended TVI (now CNM) in Albuquerque where his small-town passions quickly outgrew the big-city course offerings. He moved to Las Cruces in 2001 and graduated from New Mexico State University in 2005. He started Bully Productions while still in college.

“Wedding videos are always interesting,” Adrian Guzmán laughs, remembering his rocky start in a new city. “You always have characters at weddings and the people are frantic.” He soon move onto producing video for websites that include local realtors, businesspeople, and charitable organizations. In 2005, he began work as the Senior Media Production Specialist for the City of Las Cruces at CLC-TV. The career of a small-town boy with a camera and a passion to tell a story flourished.

CLC-TV serves Las Cruces as a government access station. “We’re a small staff here,” Adrian tells us. “We have two people.” Within these constraints, Adrian Guzmán writes, shoots, lights, and edits award-winning documentaries that capture the heart, mind, and spirit of the Mesilla Valley. His film Lets’ Shine proves of particular interest to Adrian. Here he documents a Police Athletic League (PAL) where at risk minors learn the art of boxing, and pick up some tips on discipline along the way. Located on Solano near the Mesquite historic district, the league has produced seven state champions, one national gold medalist, and a young man who will compete in the 2012 Olympics. Few people know about the program, or what can be made of at risk kids fresh out of rehab. “It’s one of those things where I wanted to shine a light on it,” Adrian says. “I want to show how they are doing fantastic things on a local, national, and world level.”

Shining a light on Las Cruces from 8-5 weekdays might be enough for some people, but Adrian Guzmán has a fire in his belly. Bully Productions not only remains alive and well, but looks to the future. Adrian has taken inspiration from Charlie Minn, the filmmaker and former Las Cruces sportscaster who documented the Las Cruces/Oñate football rivalry. But what about the kids who don’t play football?

“I was always interested in all the other things in the school … things that are really quirky, the things that are not getting the attention?” Fresh from his multiple awards for the city, Adrian sees a new kind of documentary for Las Cruces, a documentary that focuses on the trials and tribulations of the students who are often missed, forgotten behind the lights, cheerleaders, and the screams of fans. He wants to focus on the grudge matches between high schools in chess club, choir, and band. “The thing I’m looking for most is natural sound. You can make some really great video of people practicing singing, people practicing drums.”

It’s not a one-man operation to produce such a documentary. Bully Productions will need a small crew with passion and talent. As with his previous successes highlighting Las Cruces, Adrian will undoubtedly find something unique and inspirational. In the meantime, you can find his videos at CLCTV.com.