Not all Mesilla Valley legends are just about the early entrepreneurs of the Mesilla Valley. Some legends expand beyond contributions to business. In the case of Charles Winfield “Buddy” Ritter, a fifth-generation resident of historic Mesilla and owner of the Double Eagle restaurant, the legend extend to the very building he occupies. Some say that his establishment is haunted. More on that later, but there’s another unique aspect to the Double Eagle that caught our attention. 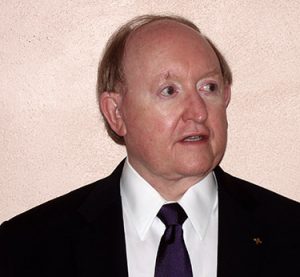 Buddy Ritter’s great-great grandfather arrived in Mesilla in the 1870’s. A surgeon and graduate of New York University’s School of Medicine, he traveled west after the Civil War to seek his fortune. In fact, Dr. Edwin Burt – Buddy Ritter’s grandmother’s grandfather – practiced medicine in the very office where Buddy now conducts his business at the Double Eagle. One of Dr. Burt’s daughters headed back east from a train in El Paso to attend college at a time when few women attended college, and met a young law student whom she married. Of course the Burt family attended this wedding, and they soon convinced this young man, Richmond P. Barnes, to come out west to practice law. Maybe New York City sounded quiet to him by the time he served as a prosecuting attorney against Oliver Milton Lee in the notorious murders of Colonel Fountain and his son. Buddy Ritter, an avid historian with his own extensive library has his own views of the case. “I personally don’t believe Lee was guilty at all … but I think he had it done.”

That’s a lot of history to keep up with, but Buddy Ritter seems cut from the same tough cloth as his ancestors. He attended high school at Mesilla Park, attended the New Mexico Military Institute, and received his degree in banking from New Mexico State University. His future seemed to be in banking, but his family owned the Lodge Hotel in Cloudcroft where there were management problems. Straight banking and military intelligence, Buddy went to Cloudcroft to run the family business. It was supposed to be a temporary position. But Buddy’s account of the situation is like so many stories we hear from entrepreneurs.

He tells it simply: “I fell in love with the business.”

Buddy Ritter has worked in the hotel and restaurant business now for over fifty years. He’s owned 4 hotels, 2 breweries, and fourteen restaurants. He built the Las Cruces Holiday Inn, now the Ramada, and received the International Design Award. His many positions, accolades, and successes could fill pages, but it’s not success that has made him successful. It’s the entrepreneurial spirit – that passion and sense of history that brought his ancestors west – that makes the Double Eagle what it is today.

During our extensive tour of his restaurant, Buddy Ritter showed me the refreshing and airy atrium where lunch is enjoyed by so many patrons. He showed me the side cozier side rooms where bank and political deals have been made. The artwork comfort and the personally-collected artwork are amazing, and Mr. Ritter has a story behind every detail that happens to capture your attention. Of course, it’s the legendary and ghostly haunting of Carlotta Salon that draws so much attention.

Like many rooms at the Double Eagle restaurant, one enters with a feeling of being overwhelmed by its history and beauty. The tables, chairs, artwork, and structure of the building itself take you in with a sense of history and calm, a realization that every nook and cranny of this classic building are unique yet fit perfectly into a grander whole. There is a calm and a history to the place without seeming the least stale. Buddy Ritter draws my attention to two chairs, tucked in opposing corners outside the main dining table. “Notice how they are worn,” he says, referring to the fabric. You can see that people have recently sat in them, many times, although the chairs are not used by patrons. The Maes family – the original owners of the sprawling home now called the Double Eagle – are said to frequent this room, and there is a photograph on the wall that seems to agree. It captures their ghostly image. “You can see where their shoulders rest,” Mr. Ritter shows me, his finger tracing the clear outline in wear of the fabric on each of the chairs. He has measured the height of the spirits who sit there. It corresponds to the heights of Señor and Señora Mais. It’s not the numbers or even the honest passion in Buddy’s eyes that convince me; it’s the splendid feeling of this room. If I were a ghost, it’s where I would choose to wait, listen to conversation, and watch history as it is made.

Shaking off something less like a chill – who could feel chilly in this warmth and luxury? – I come now to what is truly unique and remarkable about this local treasure. It’s not the atrium, the luxurious bar, or the dance hall. It’s not even the gold ceiling, so meticulously wrought above the expansive Maximilian Room.

“I march to a different drum,” Buddy says. “I never tried to copy my competitors. I like to look at things that are not necessarily local, and I try to bring it to Las Cruces and Mesilla. As an example, I figured out that we did not have a really – really – great steak house in this part of the state.” What made our steaks different than the best of the best? Mr. Ritter turned local, to a graduate of New Mexico State University who worked for Omaha Beef. The answer came down to aging. Buddy confesses, “I had no earthly idea how to do it.”

Today, Mr. Ritter is an old hand at making the most tender, delicious steaks in the region, and the process begins long before cooking or spices. Muscle in beef gives the meat its toughness. Two things break this toughness down: bacteria and enzymes. No one wants bacteria in their food, and stops acting at 37-degrees Fahrenheit. Natural enzymes, on the other hand, keep working down to 34-degrees. “That’s how we turn dust to dust,” Mr. Ritter says. So why are Buddy’s steaks the most tender in the region? The Double Eagle has invested in our only dedicated meat locker set between 34- and 37-degrees Fahrenheit. That meat locker, to me, is the most interesting room in the building. You’ll find no ghosts there … only the most tender cuts of beef in the state and beyond.

Success does not necessarily breed success. A family history does not guarantee a place of prominence in our city. A genuine passion – along with honesty and an attention to detail – is what best determines an entrepreneur’s role in Mesilla Valley. Buddy Ritter has served our country, and he has served us locally. He acted as the president of the New Mexico Hotel/Motel Association for two terms, and he was on the National Board of Directors of the American Hotel Association for four years. In 1984, New Mexico State University honored him with the President’s Award for Service, and the New Mexico Tourism Hall of Fame inducted him in 2003. He’s made many other accomplishments, but the real pleasure for Buddy comes from offering something delicious and unique to please his many patrons. With this kind of approach, success may not come easily to the entrepreneur, but it does come naturally.

For more information on the Double Eagle restaurant, please visit double-eagle-mesilla.com. We promise, there are no ghosts at the website.