Most people in the Mesilla Valley are familiar with Roberto’s Mexican Food, the classic Mexican restaurant at 908 East Amador in Las Cruces. The busy, family, restaurant – a favorite to locals and tourists alike – has satisfied local appetites since 1977. When choosing to dine at home, most of us in the valley prefer the locally produced Roberto’s Tortillas to other store-bought brands. Yet despite relishing his delicious, home-style foods, few know the story of Roberto Estrada, the singular entrepreneur with deep roots in the community, and the man behind these enterprises others. 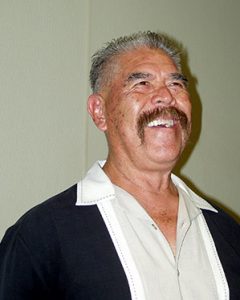 Roberto Estrada was born in Old Mesilla. He follows his local heritage back to his grandfather in the 1880’s, but his family goes back much further. Mr. Estrada simply loses track after that. His father, born in 1917, raised thirteen children – 7 boys and 6 girls – with Roberto right in the middle. “Of course in those days we didn’t go to the hospital,” says Roberto. “We were born at the house!”

Hard times in those days didn’t mean driving a few blocks down the road to find a Wi Fi hotspot. Roberto’s father owned just enough land to grow beans, chiles, and potatoes to feed the family while working in construction, and everyone chipped in to help at the farm. Roberto’s mother died when he was ten, and his youngest sibling was only 11 months old. Income was needed to sustain the family. A neighbor owned a dairy farm called Lopez Dairy, and Roberto Estrada met with the owner at 2am when he was only ten years old. He went to work.

A strong work ethic wasn’t a matter of choice or visions of success and grandeur for Roberto. It came from hardship and a need to supply for his family. At age 13, he began working for Metate Brand Tortillas – now Las Cruces Tortilla -mopping floors and performing any other required duties at the factory for the owner, Martin Oliver. According to the El Paso Herald in November of 1959: “The dough is always rolled from the outside over rolled again and so on until Mrs Fresquez [grandmother to Oliver] gives it a final clip clap caress on the way to the electric range where it is cooked much like a pan cake [sic] without grease.”

The tortillas were a sensation. Roberto says of Martin Oliver “He taught me how to run the machines…he taught me everything.” To this day, Roberto Estrada refers to the owner as “Mr. Oliver.” Respect runs deep for the man who gave Roberto his first job outside the home. Along with hard work, Roberto learned craftsmanship on his personal road to success.

Roberto Estrada had worked his way to General Manager by the time Metate Brand Tortillas became Las Cruces Tortilla, and Mr. Oliver sent him into sales. “I used to drive restaurants and grocers in Alamogordo, Silver City … all around the area,” Roberto explains. “At that time, it was all mom and pop stores.”

But hard work and dedication alone are no guarantee to success. Things changed when Mr. Oliver’s son-in-law bought out the company. The son-in-law wanted brought in his own sales people and staff, and Roberto Estrada found himself out of a job.

There’s an old, Chinese adage that says that crisis equals opportunity. Out of a job, Roberto found that his clients throughout the southern New Mexico region still wanted to buy from him. They encouraged him to start his own company, and Roberto listened.

“At that time I had a station wagon,” Roberto says. It was 1958. He could use this for delivery. Meanwhile, he made a deal with a company his former boss worked with to supply the machinery to produce the goods. He bought used equipment on a payment plan with money he’d saved up. “I put everything I had into it,” Roberto tells us. The pieces were falling into place, but he’d built relationships over the years. John Papen, a friend of his and 1966 graduate of NMSU’s College of Business Administration and Economics, had an uncle who was the owner of First National Bank. Roberto met with the bank, and his business loan was approved. For the first time in his life, Roberto Estrada went independent, working for himself and his clients as an entrepreneur. La Bonita Mexican Food Products was born in 1968.

Success did not come easily for Roberto Estrada. But he has experienced success. “Thank God we are still in business,” he says, still not taking anything for granted. His tortilla factory remains housed at its original location, producing fine foods for restaurant and grocer distribution. Roberto purchased Marcus Tortilla Factory in 1977 to further the brand, creating New Mexico Mexican Foods. “Plus I added tamales,” Roberto’s says proudly of his products, noting the paperwork needed for USDA inspection. Next door, at 908 East Amador, he now owns Roberto’s Mexican Food. It took seven years to buy that piece of real estate, opening its doors in in 1987. “That’s where I learned, you can ask God for things. But it might take seven years.”

A man of God and Family, Roberto Estrada today has his three children helping run his various businesses in the area. Chris runs La Bonita while Ronnie works with New Mexico Mexican Foods. Roberto’s only daughter, Yvette, assists with the flagship enterprise, Roberto’s restaurant. Roberto, meanwhile, remains hands on with his enterprises. In fact, he served his enterprise by helping with dishes when I met him.

An active member of the community, Roberto Estrada is a proud member of the Las Cruces Chamber of Commerce and the Hispano Chamber of Commerce de Las Cruces. He is proud of the fact that New Mexico State University graduates visit town, and they come to his restaurant for a taste of home. Given his fame for delicious enchiladas, I had to ask him if he preferred red or green.

Mr. Estrada only smiled of course, and he would not say.